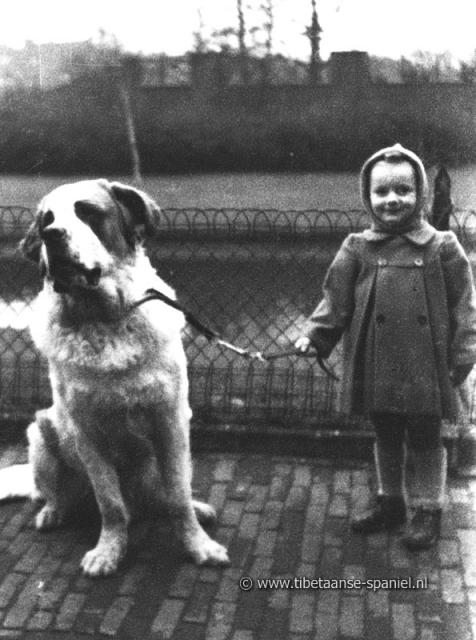 At home we had, when I was a little girl, allways animals around, from tropical fish and brids to sheep. With my father I bred colour mice. My uncle and aunt had a Saint-Bernard and I wanted a dog for my own als. after a lot of pressure a boxer arrived. Her name was Connie and she only became 8 years old. Th ewhole family missed her so much that some time later a beautiful boxer pup with a pedigree came to live with us. Her name was Borga. Yes, after a few years I wanted a to breed a nest of my own of course. After having talked to the breeder of Borga, he was also a judge, she was mated with a nice dog from his kennel. But unfortunately, after two efforts, no puppies! A pity, but I had to forget the puppies then. 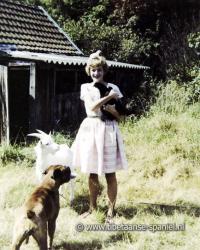 At the age of 19 I wanted a dog of my own. My grandfather always had a Borzoi and I wanted the same type of dog. But I lived at my parents home and they did not like this kind of large dog. My second choice was an Afghan hound and after a while my first own dog arrived in 1970. Her name was Anyatahplaksa Aziz el Djefna. I went to some shows with her and she did well there with good results. Breeding with her would be nice, but we lived at that time in an appartment and it was no good idea to raise puppies of such a large dog type.

After a while, I had been married by that time and had a daughter already, were have been moved to a row house with a nice garden. Now I was able to breed at last, but in the meantime our Afghan became 7 years and she was at an age that a first nest is not desirable.

In 1979 a Saluki came to our family. Her name was Aymara el Charnak and in 1980 she got company of an Afghan, that listened for the name Imandra Ben Mazir-i-Sharif. They also went to shows with us and again the idea to breed with them entered my mind. Now I asked for a kennelname and after a few names that were rejected, in 1981 the Pul-i-Khumri kennel was a fact. The first litter of Pul-i-Khumri Salukis was born in May 1983 and 2 nests of Salukis and one nes Afghans followed.
Showing and breeding of large dogs became difficult for me with a family of two little children and I stopped with my hobby. Most of the Salukis and Afghans, that lived with us by that time, stayed only for company. They reached an age between 12 and 15 years. We had still 2 elder Salukis when we began to think of a smaller race and really started to search for that.

In June 1992, the first Tibetan Spaniel, Kensing Tiara from England, in the dog family. With her children begins the story of the Tibetan Spaniels of Pul-i-Khumri. Tiara never became champion, she simply did not like showing. Until she was 11 years old and again went to a clubmatch. Then she enjoyed it and just earned her first CAC! She certainly has a lot of beautiful offspring who have become champions.

The Chinese Crested also came our way. I was in love and thought it was fun for a the Tibbies to have a Chinese as companion. After a few years, in the summer of 2006, that idea became reality with a small Chinese Crested dog named: Happy dancing Fancy Fairytail. A great funny cheerful cuddly playful puppy. Our Tibetans immediately made friends with the new addition. They play and sleep wonderfully together.